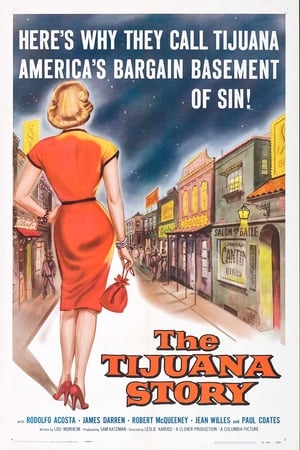 Storyline:
Tijuana is a city ridden with crime, vice and corruption, with the local Mexican mob stopping anyone who attempts to clean up the city. However, the mob meets its match when it is challenged by a brave newspaper editor.
Written by
Jim Riecken <[email protected]>
User Reviews: TIJUANA STORY is a tepid crime drama based on a true story of newspaperman, Manuel Acosta Mesa (Rudolfo Acosta) who takes on the mob / syndicate led by fictionalized mobster Peron Diaz (Paul Newlan). After Acosta digs up the names of influential politicians involved in Diaz’s illegal activities, he is targeted for assassination.

The movie opens with a newsreel-style recounting of Acosta’s importance as a whistle blower, followed by a talking head American journalist who actually wrote about the Acosta case. His tone suggests that Acosta Mesa had brought trouble upon himself due to the provocative nature of his reporting. While the real-life story of this brave journalist could have made a good, hard-hitting exposé, but we’re in producer Sam Katzman territory, which means poor production values, one-take performances and sensationalized dramatics.

The denizens of Tijuana are shown as mostly villainous peasants, while the top line casting is strictly from Hollywood and Vine. For example, the main Hispanic mob boss is played by Paul Newlan, who was born in Plattsburgh, Nebraska. Acosta’s daughter and the newspaper publisher are both played by Anglos. The sassy bar girl who talks Mitch into buying marijuana makes the mistake of trying on an irritating Mexican accent.

Despite these handicaps, a few performances stand out: Rudolfo Acosto is a strong presence playing against type as the hero but his delivery is stilted. Jean Willes plays the stereotypical mob moll with some class, and James Darren and Robert Blake make an impression as a disaffected J.D. and as Acosta’s son, respectively. Darren had been signed to a long-term contract with Columbia Pictures in the summer of 1956, and TIJUANA STORY was one of several B-movies that featured the young actor. However, he plays a small role here in scenes that look like they were an afterthought and are barely connected with the Acosta plot-line.

On balance, none of these thespians are supported by the clichéd screenplay by the usually competent Lou Morheim, which contains its share of clumsy dialog, such as, "I know you’ve had some results crashing into walruses," "A little bit of that would put hair on my chest, oh, mama," "What are you, an avenging angel?"

Likewise, the direction and staging of many scenes is unimaginative and at times unintentionally funny, as when faux jazz players blithely continue their playing on a night club stage while half the cast is fist fighting and throwing chairs around on the dance floor.