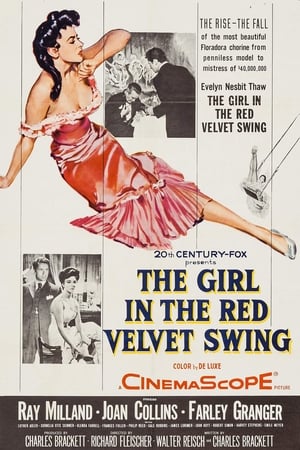 Storyline:
It’s the early twentieth century New York City. There exists a high level of animosity by Harry Thaw, a wealthy Pittsburgh businessman, toward renowned architect Stanford White for Harry feeling those dealing with the New York social set giving Stanford many of the perks that should rightfully have gone to him. While Stanford is mature and refined, Harry is brash, impetuous and volatile. That animosity is ratcheted up a notch when they both meet Evelyn Nesbit, a beautiful but poor model with who they are both infatuated, she appearing in the chorus of her first Broadway musical revue. After getting to know Evelyn, married Stanford, who still loves his wife and thus will not divorce her, wants nonetheless to provide Evelyn with the comforts and breeding of those within his social circle. His infatuation with her is also despite he being old enough to be her father. Harry, who is more age appropriate, takes a more direct approach in his pursuit of Evelyn, he doing whatever to convince …
Written by
Huggo
User Reviews: God, I’ve read the reviews.

I know I’ll be lambasted for accusing amateur critics for being totally rubbish. BUT can any one get to the realization that this movie (made in 1955) was based on real people with real lives over 100 years ago (as I write – 1 May 2008!!).

That is amazing in it itself – Let’s let a few things go. The movie was made 49 years after the murder. I’m writing about it after 102 years – and it’s still a great, and terribly sad story. Who could tell it now!? We think we’re the first generation to be totally liberated with sex scenes. We’re so smart that we watch Sex in the City (and the amazing swing scene). However, this movie was made in 1955 and is based upon a very real and very sad story. Evelyn Nesbit was one of the first and greatest Hollywood actresses – up until 1930 she and others like her were sometimes freely allowed a sexuality that is still, to this day, considered sometimes pornographic.

However, regarding this movie and (real) story in particular, what is most amazing is how a small town beauty in the first decade of the 1900’s (correct – 100 years ago) allowed herself to be caught between two powerful men (infact there was a third – actually in the middle – John Barrymore) and that her life eventually became a Hollywood thriller. Only in the United States of America.

Good God! Elizabeth Nesbit was 16 when she met the 47 year old Mr. Standford White – http://en.wikipedia.org/wiki/Evelyn_Nesbit. She was a "silent actress" – never made a speaking role in her life. However perhaps she was the first sell out. She was special adviser to this film… why wouldn’t she be – she was central to it. She IS it!!! But even by 1930 (yet alone 1955) Evelyn Nesbit was a total has been. According to Wikipedia, largely because of her third husband – the Mr.Thaw that killed Mr. White – her opportunities to act as the "Vamp" she once had, ended. The reason Thaw fell in love with her was the very reason she couldn’t act on the screen that made her a 20th Century legend. Looking back however, even if the transition from the movies to the talkies allowed it (and it rarely did), Evelyn was always going to be something from a by-gone age – "The Vamp" – a segment from the curiosity shop – the "silents" – and, allegedly, a witness to a murder of a former lover – in a time when men still wore spats, and top hats and long tails… It all seems so romantic now – except that this was real, 102 years ago a man was shot in the face for love or lust or jealousy, somebody actually was really murdered. I doubt it was romantic – in any way, shape or form.

What do you think – would a 2008 version do these people and especially Evelyn Nesbit more justice, or should we just let people rest? After all in 1955 the story was only 49 years old…