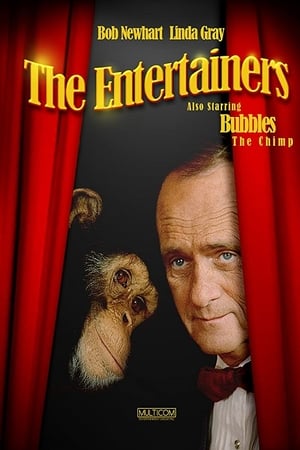 Storyline:
Bob Newhart stars as comedian Todd Wilson, whose act includes a chimp. Linda Gray plays Laura, the love interest – for Todd, not the chimp.
User Reviews: The chimp that shares billing with Newhart in this otherwise unbearable network timeslot filler is none other than BUBBLES. That’s right…the late King of Pop’s enslaved simian BUBBLES!! This fact was heavily promoted at the time of the movie’s airing, but seems to have gotten lost thru the fog of time. POOR Bubbles. I don’t think he’s known a happy day in his life. Like nearly ALL captive chimps, he lived a life in front of the cameras while young and cute, but as we all know, the day comes when ‘young and cute’ gives way to ‘grown-up and dangerous,’ and Bubbles, unfortunately, was no exception. Animal Planet ran a memorable special in 2010 called "Michael Jackson and Bubbles: The Untold Story," in which a weepy Sister LaToya was allowed to visit him in his current digs – a chain-link cage the size of your bathroom. LaToya remembered him SO fondly, and was SURE he remembered her. He didn’t. He was just southeast of catatonic, and his face said "KILL ME." NOTHING GOOD EVER COMES OF CHIMPS IN CAPTIVITY…PLEASE don’t support it. And should you find the chance to see "The Entertainers," for as many minutes as you’ve got before you can take no more, send a kind thought to Bubbles.