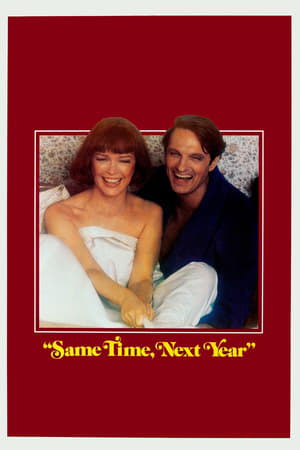 Storyline:
A man and woman meet by chance at a romantic inn over dinner. Although both are married to others, they find themselves in the same bed the next morning questioning how this could have happened. They agree to meet on the same weekend each year. Originally a stage play, the two are seen changing, years apart, always in the same room in different scenes. Each of them always appears on schedule, but as time goes on each has some personal crisis that the other helps them through, often without both of them understanding what is going on.
Written by
John Vogel <[email protected]>
User Reviews: As Johnny Mathis and Jane Oliver sing "The Last Time I Felt Like This" over the opening credits, we witness a man sitting alone in a restaurant. Across the way is a young woman. As their eyes meet, they seem to be making a connection, and before long the young man introduces himself to the woman. We see them talking, laughing, and eventually we see them together in their room in a coastal inn. As the title song fades out, we are with them as they awaken.

What we find out as the story really begins, is that these two people, George (Alan Alda) and Doris (Ellen Burstyn), are married, but to other people. They have both done something which neither of them thought was possible, and that is to cheat on their spouses. As they try to comically cope with what they have done, we find out little snippets about their home lives and exactly why each of them are at the inn. They have legitimate reasons for being away from their homes, but it is clear that these reasons are just excuses for them to have a brief respite from being trapped in lives they aren’t entirely happy with. It is perhaps this, along with what up until now had been unfulfilled passion, that draws them together more than anything." They finally agree to meet at the same inn every year at the same time, to carry on their adulterous affair.

Written as a stage play, the film resembles one. The story is told in five year intervals and when George and Doris meet, the setting only briefly leaves the room which they occupy together. As the years pass, we see how the lives of Doris and George change in relationship to events that occur in their home lives during the rest of the year. We also witness how events in a changing world also effect their lives, including how the Vietnam War plays a factor in George’s life, and how Woman’s Lib seems to completely change Doris during one visit.

Filmed plays, even with a witty script such as the one here by Bernard Slade, can often lose their way when transferred to film. They can become an exercise in tedium and boredom if not done correctly. Thanks to the excellent performances by Alda and Burstyn, and some smart directing choices by Robert Mulligan, this film never falls into that trap. In the transition from one five year interval to the next, Mulligan uses still photographs to picture the events occurring in the world during those five years. This clues us in on the fact that much of what happens in the intervening years will have a direct effect on the relationship between George And Doris. In a manner of speaking, it gives a small amount of suspense to the film as we become more anxious to witness the changes in George and Doris relationship, and also their ever changing feelings toward one another, their spouses, and the world around them.

I mentioned earlier about the performances of Alda And Burstyn, and indeed they are amazing. It’s one thing to portray a character in a film who may undergo a few subtle distinct changes in personality over the course of time, but Alda and Burstyn are required to do it over a period of many years. They make us believe not only in their affection for each other, but just by telling stories of their home life, we can tell the respect they also have for their spouses, despite their annual liaison.

Same Time Next Year may never win many accolades, but once you see it you will always remember it and think fondly of it like you would an old friend. I know I do, and when a film can make me think that way of it, I have no choice but to give it my grade which for Same Time, Next Year is a B+.