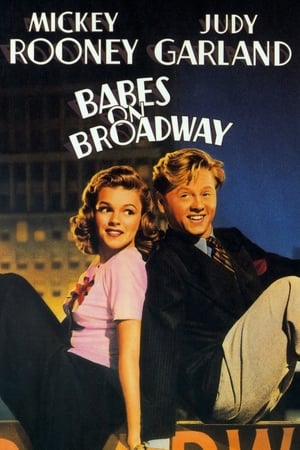 Storyline:
Tommy Williams desperately wants to get to Broadway, but as he is only singing in a spaghetti house for tips he is a long way off. He meets Penny Morris, herself no mean singer, and through her gets the idea to promote a show to send orphaned children on a country holiday. But he is only using the kids to get on himself, which Penny soon realises. With his romance off, an engagement in Philadelphia he can’t get to, and, indeed, war in Europe, life can be difficult.
Written by
Jeremy Perkins {J-26}
User Reviews: Ahh, musicals. A tough genre; mostly unwatchable except for certain show-stopping individual numbers (which is the reason compilation films like ‘That’s Entertainment’ are so much more enjoyable). Obviously a minstrel finale is in itself cringe-worthy, but this movie has so much more to cringe about. There’s that, now comically risible, putting-on-a-show-in-our-backyard story line; and of all people to direct such a set-up you get Busby Berkeley. The "kids" have no money and pull strings right and left to get that show they just got to put on (sure, it’s for orphans and rickets and whatnot, but the sweaty desperation of the would-be talent is all about the need to show off in front of an audience) and when they do put on the show it is GIGANTIC with what looks like a hundred hoofers and singers, all tightly choreographed in that elaborately tricky Berkeley style. And, in the hope-you-ignore-it category, these poor kids somehow manage to scrape together hundreds of matching costumes for every number (I guess that old theatre they have access to is a treasure trove of perfect fit, mint-edition clothing, from hoe-down jeans to tuxedos). Sure, it’s all fantasy, and the plot is mostly non-existent, but the writers could have tried a little harder considering the enormous amount of energy on screen… or should I say the enormous amount of Mickey Rooney on screen. Woo-wee! The young Rooney has a dynamo inside his dynamo! He all but comes out at you in 3-D to grab your throat and demand that you be impressed. It’s a nitro of prodigious talent and a glycerin of overwhelming ego that nearly explodes the film to Rooney-flavored smithereens. And so only a giant talent like Judy Garland can compete with him, and that’s possibly why they appear together so often in films. She looks great, sounds great and charms in her usual wistful manner. She wears well, unlike Rooney, who captivated audiences at the time with his ham-fisted theatrics but now repels for the most part. But the film does contain some notable features: like the first appearance of the truly talented Margaret O’Brien, all of age four, and on camera for all of one minute. There’s also a young Donna Reed in a bit part, and even Rooney’s father, Joe Yule, gets a bit as James Gleason’s assistant. It also features future director Richard Quine (‘Bell, Book and Candle’, etc.) in a rare, though colorless, acting role as a part of Rooney’s performing team. And once-famed popular culture critic Alexander Woollcott, part of the famous Algonquin Round Table, has a bit at the beginning. Garland sings "How About You" which became a hit song in 1942 (for Tommy Dorsey, not Garland). It was written by Harburg & Lane, who had only recently worked together. In 1947 they would create the smash musical ‘Finian’s Rainbow’ on Broadway (which coincidentally, has racist components to it that also makes it hard for audiences today to take, much like the minstrel stuff in ‘Babes on Broadway’). So, there are some things to gather from this otherwise dated hash. And dated doesn’t just mean the story line or minstrel theatrics, but also the heavy dose of British wartime material, including a number extolling their prideful "stiff upper lip" attitude and presented with re-settled English children crying into the camera. And with Garland crying and Virginia Weidler crying and Rooney always ready to burst into tears, this film almost suffers from dehydration!