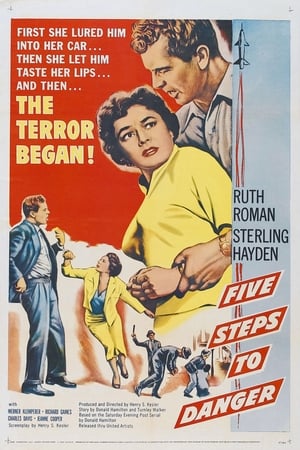 Storyline:
When his car breaks down during a trip from Los Angeles to Texas John Emmett meets another motorist, Ann Nicholson, who offers him a lift. He learns that she is running away from her physician, Dr. Simmons, and the police, who want to question her about a murdered Central Intelligence Agent in Los Angeles. Anne, as it also turns out, is a native of Berlin, Germany. She had come into possession of a valuable secret formula for a 4000-mile-per-hour rocket, which is written on the reverse side of a small pocket mirror she carries. She wants to deliver this to a scientist in the United States. But, the scientist is an enemy agent as is her doctor and they, and the F.B.I are after her.
Written by
Les Adams <[email protected]>
User Reviews: Another IMDb reviewer, dbdumonteil, made the key observation that this movie was reminiscent of Hitchcock– about an ordinary man caught up in extraordinary circumstances. It also has handcuffed characters ("39 Steps"), an evil doctor ("Spellbound"), and German scientists ("Notorious"). But this is a far cry from Hitchcock. In Henry S. Kesler’s hands, I’m not even sure what the eponymous five steps to danger were.

The idea isn’t bad. The first scene is intriguing. The road scenes capture the American Southwest in the mid-1950s. And the performances are adequate, except for the many lawmen who are so rigid and expressionless, you’d think they’d be convincing, but no.

But its minor attributes are overwhelmed by major problems: there is no memorable dialog; the plot is more convoluted than complex; the editing is atrocious (the chase scene with the gunsel is particularly inept); and the big final scene at the weapons lab is too little, too late.

Kesler made three movies before he migrated to TV, where he directed only a few episodes of each of a handful of 1950s series, the most famous of which is "Highway Patrol." If you’ve seen "Highway Patrol," then you know that Kesler is strictly from the point-and-shoot school of film-making. There isn’t an ounce of creativity in "Five Steps"– nothing in the editing or camera-work that builds tension or rhythm, let alone pace.

It deserves less than a 5 rating, but I’ve always admired the under-rated Ruth Roman; and it was fun to see Werner Klemperer, Jeanne Cooper ("Young and Restless"), and Ken Curtis ("Gunsmoke") in early roles; but in the final analysis, I can’t give any Sterling Hayden picture less than a 5.